Woman with Crows by Ruth Thompson 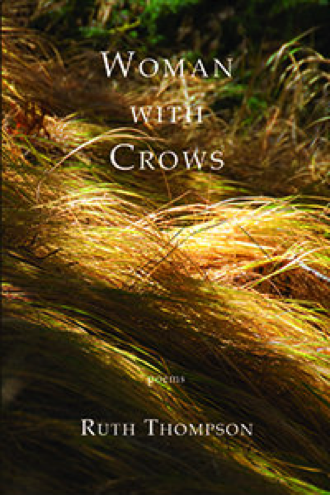 Woman With Crows is Ruth Thompson’s second book of poems. It explores her own past from ”hungry ghosts” to the Fool-Crone, “dancing what she does not know to dance.” It was a finalist for AROHO’s To the Lighthouse Poetry Publication Prize and includes poems that won the New Millennium Writings and Harpur Palate awards. The poem “The White Queen” has generated conversation about dementia and multidimensional expansion and a new cycle of “demented” and “oracle” poems. The book led to an interview and review at The California Journal of Women Writers, and Ruth’s posts about writing, meditation, and yoga, and many of the poems, are posted at her website, ruththompson.net. Woman With Crows was originally published by Word Press Books in 2012. A new edition was published by Saddle Road Press in 2013. (Which is another story.)

I have attended two AROHO retreats at Ghost Ranch. Each time something new has broken open for me – in 2013 a wild new voice broke out as I sat with my “river sisters” in the red clay of the creek. My first joyous glimmer that there might actually be a community of support for my work began with my first reading at AROHO 2011. Most of all, my “family” of writers, my deepest and most supportive writing friendships, grew out of these retreats. We continue to inspire and support one another, sometimes in person, often through Facebook groups or email. I live now in Hilo, Hawai’i and although I travel to read and teach, this community is my lifeline and my true home.

“Woman with Crows is an antidote to fear” is Ruth’s favorite comment about the book. It comes from a recent review by poet Jendi Reiter, editor of Winning Writers. She goes on to say:“Fatness recurs as a revolutionary symbol of joy: a woman’s body is not her enemy, and scarcity is not the deepest truth….[Even] the unraveling of memory and the shedding of possessions are not a story of decline but a fairy tale of transformation…. {But] there are fireworks here, and snakes, and ‘ooze shining and blooming and with sex in it.’”

“She is a woman writer for women writers; there is a clear sense of feminine community in her work that is as pragmatic as it is mythic.”

“Thompson’s range of reference – from Buddhist ghosts to Grimm fairy tales to Sumerian and Greek goddesses to personal and ancestral tales and legends – is wide and knowing, yet always transformed by a lived and experienced imagination, in a language that is wistful in its laments, sensual in its celebrations. These courageous poems journey the dark and beautiful mysteries and bravely offer, in a lyric that is fiercely wild and refreshingly independent, deeply earned wisdoms.”

“Among these brave poems, two stand out— for their beautifully placed, speakable cadences, their light touch, their transcendent vision. In ‘Journeying West’ the pioneer women are purged of the appurtenances of the old life until, empty, they come to stand before the new life’s open sea. For ‘The White Queen,’ memory loss circles, meanders, stops, starts, becomes a via negativa leading away from the merely actual of memory and desire to imagination’s new world of the freely possible….”