So by Martha Andrews Donovan

“So” by Martha Andrews Donovan

And I have so many words—
—Maxine Hong Kingston, The Woman Warrior 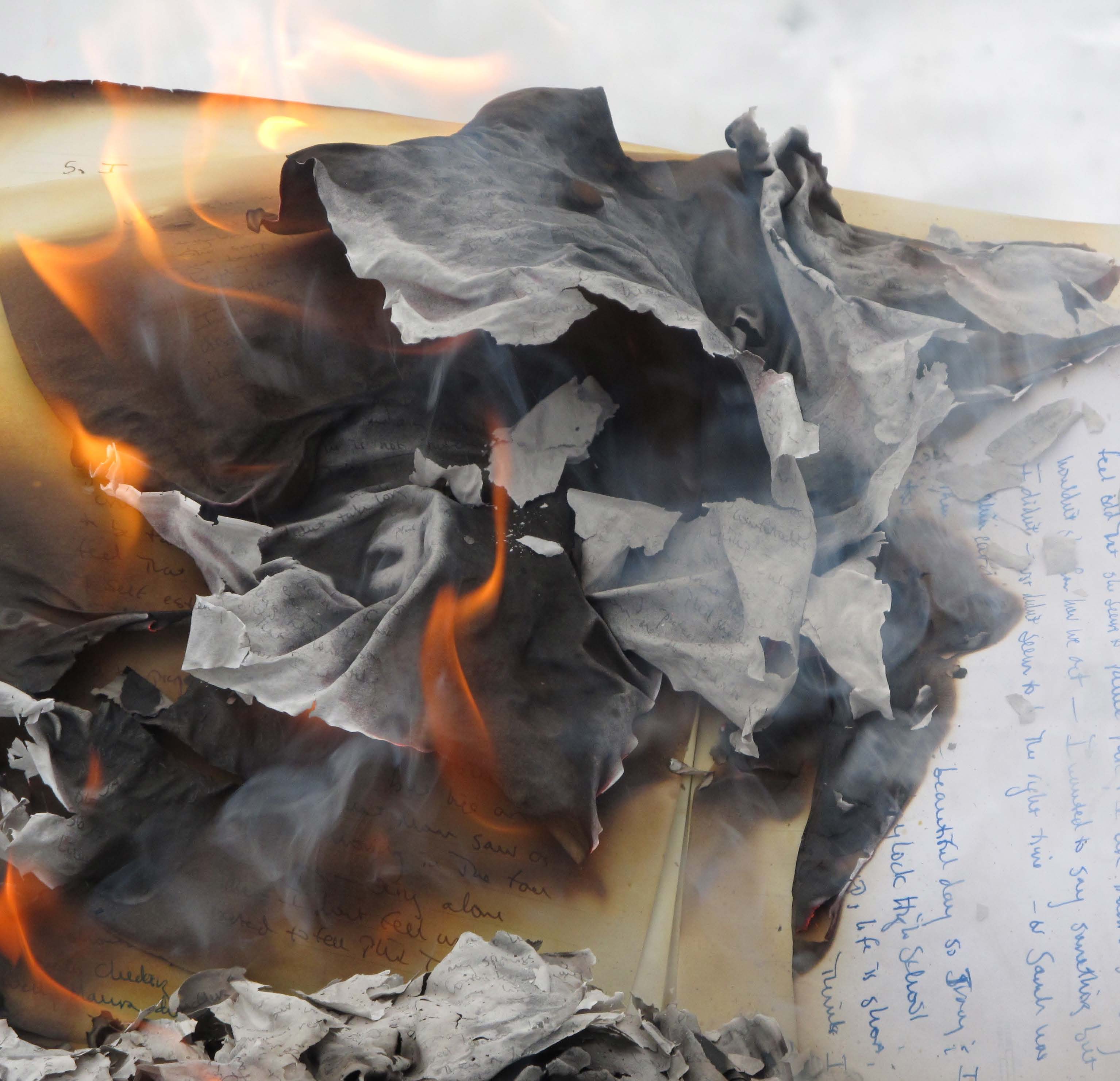 Here, in the high desert, I am finding my way back to language. I will carry these
words on my back. So. I.

I keep circling — how to enter? I have decided to write this as a letter to you.
Unformed. Still forming.

Four years ago, in 2011, my marriage began to dissolve. My husband announced
his unhappiness.

The image I invited you to “carve” on my back is a photograph of one of my
divorce journals in flames. Last winter I fed twenty-three journals to the flames —
three years of daily writing during the seemingly sudden but long dissolution of my
marriage when my then husband revealed his deep unhappiness, claiming I had
excluded him from a writing life, one of many grievances.

I was stunned into silence.

If writing had destroyed my marriage, then I no longer wanted to write. In the
absence of clarity or confidence, this was my reasoning. And so my public writing
— which had been fruitful and blossoming at that time — came to an abrupt end.
The only language I turned to was the stunned voice in my head — and it was this
voice that found its way into the pages of twenty-three journals. The only way to
get out of bed in the morning was to write my way out. The only way I could find
to lie down each night was to write my way down. This private writing sustained
me through those days of confusion and anger and grief.

But this language was never meant for anyone else — and eventually I grew tired of
the story. There were moments of lyricism, moments of insights, even moments of
beauty — but mostly it became a very tiresome story and I grew bored. So I
stopped writing and put the journals away.

They sat on the floor by my bedside. Then they sat on my bookshelf. Then they
sat in storage, a few miles from my home. And then, last winter, they sat in my car
and traveled across the mountains and into a valley where a friend and her
husband built me a fire. And I fed my writing — journal by journal, page by page —
into the flames.

In a certain way, my divorce was a cliché — the long-married couple whose
marriage ends in divorce when a child goes off to college. In a certain way, all
divorces are clichés — the end of any marriage, in our times, a common and likely
story — and who, in their right minds, after all, would willingly accept such terrible
odds? And yet, somehow, still, I am glad for the faith I see in friends who choose
— and choose again — to marry. It is possible that I will find my way to such faith
again.

Meanwhile, the writing in those journals began to haunt my living. This language
was no longer helping me to breathe and words became stones in my mouth. This
language belonged somewhere else. It was time for me to find my way to a new
story.

And so, like the woman warrior, I will invent a new self out of words.

Martha Andrews Donovan’s Artist Statement: After hearing Shauna Osborn’s talk “Re-interpreting the Carved Revenge on Your Back” at AROHO 2015, I decided that I wanted to participate in her “Carved Skin” project; I chose to have Shauna layer this photograph of mine (an image of one of twenty-three divorce journals I burned in the winter of 2015) onto her photograph of my back. And so began the reclaiming of my voice after the dissolution of my marriage.