“Pull the Lever!” An AROHO Anthem by Lauren Baldwin 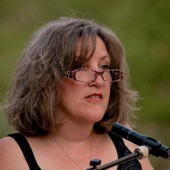 Lauren Baldwin completed her MFA in Fiction at Vermont College of Fine Arts in 2010 and her JD at the University of New Mexico School of Law in 1992. She is a Judicial Hearing Officer in the Family Court division of the Second Judicial District Court in Albuquerque, New Mexico. Lauren has attended every AROHO retreat since its inception and is the retreat’s hospitality coordinator (the woman with wine and duct tape). She is a legal internet writer for Nolo, a legal publishing company. a maniacal knitter, is working on a novel, and also writes creative non-fiction and poetry. She is also a sponsor of the Tillie Olsen Retreat Fellowship.

I have collected every voice that said you can’t
the middle school teacher who said write what you know —
this is all too old for you
the friend who said I can’t critique this poem —
it’s just so disturbing
the writing teacher who said I was such an extraordinary writer so talented
so reminiscent of her younger self
and who, three months later, dismissed me with one stroke of the keys

I have collected the voices inside myself and the voices inside you
that say every day every hour every minute every second
you are not good enough you will never be good enough you cannot be good enough
you are not as smart as you think you are
you are not as smart as her, that brilliant woman who rewrites Greek plays 1
you’ll never be as good as that genius of a girl from Texas
whose poem with the words “slick fender” and “come” sings like a siren 2
you are wasting time you are indulging yourself you probably aren’t that good
you aren’t writing what your father wanted
you are writing what your mother didn’t want you to write
you are telling secrets you were supposed to keep
you might not be that good you might get bad reviews you’ve never won a prize
maybe you’re just an ok writer and that’s all you’ll ever be
nothing extraordinary just a middle class woman writing little poems and essays and stories
that you publish in journals with a distribution of ten when you count your family members
and you don’t have time
and you don’t have space
and your children need you to make breakfast
need you to make a living
need a college education not a mother who’s a writer living in the desert on her words
and your boyfriend or your girlfriend or your husband needs attention
and you and your partner need retirement and
you can’t retire on words

I have collected them all —
every sensible and stupid word that says you can’t
every voice that says you are not good enough
They are gathered here — suspended
Other voices whisper around us of a lever
They have been whispering of this lever all these years
in an unknown language as ancient as grace
that I could not comprehend
but finally I am translating
and they are saying fuck yes!
and I scream
PULL THE LEVER!
and my hand and my arm and all of me reaches into this glorious pull
and every shitty word like “no” or “you can’t” or “you shouldn’t” or “you are not”
drops
into oblivion.