Home » To the Lighthouse » Interview with Leia Penina Wilson 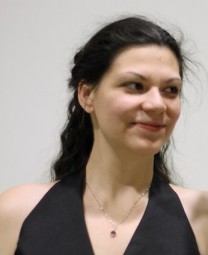 Leia Penina Wilson, Winner of the 2012 AROHO To the Lighthouse Poetry Publication Prize

AROHO: If we’re remembering correctly, the first time you held the final published product of i built a boat was at the AROHO/Red Hen Press reading at the Annenberg Beach House last October. What was that like?

LPW: It was! O I was super thrilled, to hold the physical thing in my hands! There’s something real and true about holding something. I saw a jackrabbit for the first time last fall and I went towards it to hold because it was the strangest creature and I wanted to affirm its adorable reality—that’s what holding the book was like. The book was a little ephemeral before that for me—having it in my hands for the first time made it more than an idea. To hold my book as an artifact of everybody’s effort and support (AROHO, Red Hen, my friends who put up with reading those poems in or listening at readings or sitting around drinking and playing games, Professors that were generous enough to set me back on course when I needed that poetic compass, my family for their support when I told them I was going to school for words, to maybe be that thing called author (such an imaginary bird!)) was a moment I will not soon forget—and the sky that day so purple, red, orange. To share my poems and sunset with all the people who came out to the reading makes the whole moment a most embodied ode. I have only gratitude.

AROHO: What advice would you give to those considering submitting their work, to the AROHO Book Prizes or elsewhere?

LPW: Submit! Right now! Go! I understand that initial hesitation to submit, the crumbling of your soul as you send your beloved off on its own (at least that’s how I felt for about a minute)—you have to move passed whatever stays your hand. A few winters ago I was at home, working on a manuscript submission, making a list of where to submit and how much each submission would cost. My mom came into the kitchen, I told her what I was doing—she says is that enough? And she gives me her credit card and tells me she’ll pay the submission fees, says it’s an investment. It’s an investment. If someone else was willing to believe that I was worth 25, 28, 30 dollars then I was willing to believe in that belief. Poetry does have value. Of course, its value is more than monetary—as soon as I became unshy about this, I became confident in the realness of my words. Do I sound like a snob? Good. Sometimes you have to be a snob. Nobody else is going to do that work for you. You have to be generous to yourself. You have to unshy yourself. Go! Right now, submit—everywhere!

LPW: O yes! I’m working on a thing now. You know, I don’t really know anything about poetry so it always makes me nervous to talk about my own work. I’ll call this thing I’m working on now (for lack of a better description) an exaltation unstrange. With an exclamation point! Exaltation unstrange! It’s a translation of what survives of the beloved (my beloved, as I see her)—the wound maddening (a wound that’s a ceremony and a prayer). Haha—it’s young right now so I don’t want to scare it away from itself. I’m treating it as I do stray animals—cat you can stay here as long as you want but don’t chew up my shoes. I suppose if it were a cat or a sloth bear (my new favorite bear) I’d let it eat my shoes if it wanted. I’ve been reading Jane Ellen Harrison for the last couple weeks and her soullife is the company that’s been informing much of my new stuff. I’m really excited about her. This exaltation unstrange! started when a friend asked me to write an almost sexy poem and has now grown into many invocations and exclamations. I’ve also fallen in love with the exclamation point! Over! Over! Over again! I want to embody the ongoingness of it—I want it all out in front. I want spring to spring eternally—the sort of tearing forth that flowers do so well. I want to learn that. The first time I read Williams in his entirety (Cora and Spring) I was so moved—something about his gesture towards that season as a continual celebration really affected my imagination. I realize our imaginations change all the time but that was one of those moments where I could see it happening. O I love Cora! That muchness! O true heart! How do I learn that! Really, I have no idea. I’ve moved out to the desert to try to learn this vastness, that muchness.

AROHO: The 2015 TTL Prize Judge is poet A.E. Stallings, who said in an interview with Poetry Daily:

“It is ultimately a brash act to write down your words for posterity. You have to have a healthy ego, I think, to dare to create; or at least be able to silence your inner critic for swaths of time. And I think there are rare moments for most writers when the poem somehow comes out even better than you had hoped and when you do have this surge of energy and think-“I am a genius!” But then there is the other 98% of the time, when you are disgruntled with everything you’ve ever written, or despair of writing a poem again, and think, ”I’m an impostor!” Maybe you think both these things in the same day.”

LPW: O definitely, I agree about ego. I think first of ego as an interior movement though. An intrinsic verification—haha! Wow, I’m sorry—verification is such an inhospitable word. I don’t mean it unkindly or sterilely. The outside stuff certainly helps—winning the AROHO prize last year did this for me—an acknowledgement for which I will be eternally grateful. I think my ego comes first from my recognition of worth, and I use that to generate everything else. I never have surges of energy. What a great movement to compose that way! I’m lazy. Because I know I’m lazy, I make myself get up early and work. I work a couple hours before I go to bed too. Sometimes that work is just me thinking through a sentence and then writing that one sentence down. Most of the time it’s me snotting everywhere on the paper then taking enough stuff out to make the poem not suck. I like to collect. I never think of writing as creating—again, I’m lazy. I like to arrange, accumulate my strangeness, find accuracy in strangeness. I buy butcher’s paper (that brown paper that comes in giant rolls?) and tape it to my walls or cut it into shapes of things and write on that. Try writing on a rabbit sometimes—it’s fun. This semester is busy for me (I moved to the desert to work on my PhD—come to me I say to it everyday) so I’ve made the weekend my work space. I can relate to being disgruntled. Not 98% of the time though—I’m such a jerk! 98% of the time I think I’m awesome. It’s that 2% of something else that I like to kick in the teeth. For me, it’s not about thinking “I’m an imposter.” I am myself. I often get anxious about myself but I am still always me. When I get anxious, I just put on a mask. Literally, I mean, I collect masks. When I become too anxious or restless about myself or about my poetry (or any writing) I shift into being leopardleia, foxleia, jellyfishleia, vultureleia—whatever it takes to shake myself free of the anxiety.