in the icehouse by Genevieve Kaplan

Home » Books » in the icehouse by Genevieve Kaplan 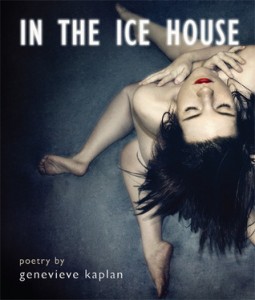 in the ice house by Genevieve Kaplan, To the Lighthouse Poetry Publication Prize Winner, 2009

Genevieve Kaplan’s In the ice house offers an innovative meditation on domestic life and the physical world that surrounds it, chronicling “at least the beginnings of some disaster” taking place in a landscape that “had no symmetry.” Deftly channeling poets like Wallace Stevens and John Ashbery, as well as invoking Kaplan’s own distinct poetic sensibility, these poems reveal an atmospheric and wondrous world filled with odd and compelling images. Readers confront the menace of the ordinary, “the whale-faced spout of the drainpipe, the cluck / of the chicken-bird” and how “the light attacks / the window and the stress of the shining / does not ease.” The poet’s insistent evocation of elemental images—the birds, the ice, the water—becomes almost incantatory, as the speaker seeks escape from “the frantic outside” she’s trapped within. Kaplan’s sky “has the depth / of an ocean,” and this book deeply articulates how “silence is the only word that can replace loss.” Moving artfully between internal desires and incisive observations of the external, these stunning poems radiate with both heat and ice.

I thought winning AROHO’s To the Lighthouse prize meant that the book of poetry I had worked on for so long would actually become a published reality. True! But what turned out to be equally important was that the prize also led me to join the larger AROHO community, benefitting from their support and encouragement as in the ice house made its way out into the world.
–Genevieve Kaplan