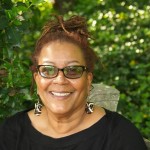 Breena Clarke, currently a resident of Jersey City, has written three historical novels. She has recently completed Angels Make Their Hope Here, set in an imagined mixed-race community in 19th century New Jersey. Breena’s debut novel, River, Cross My Heart (1999) was an Oprah Book Club selection and her critically reviewed second novel, Stand The Storm, set in mid-19th century Washington, D.C., was chosen by the Washington Post Book Review as one of 100 best for 2008. Breena Clarke is on the Board of Directors of A Room Of Her Own Foundation, is a member of the fiction faculty of The Stonecoast MFA Creative Writing program at The University of Southern Maine, and is an organizer of The Hobart Book Village Festival of Women Writers.

Breena blogs about the writing, editing and promoting process at: https://www.tumblr.com/blog/angelsmaketheirhopehere www.BreenaClarke.com Prior to publishing her novels, Breena administered the Editorial Diversity Program at Time Warner Inc. in New York City, where she mentored a number of young journalists and writers.