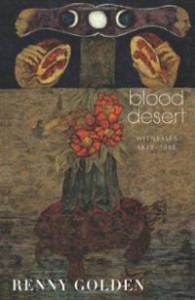 Golden’s poetry book Blood Desert: Witnesses 1820-1880, published by the University of New Mexico Press, won the Women’s Writing the West (WILLA Literary Award), was named a Southwest Notable Book of the Year 2012, and was a finalist for the New Mexico Book Award 2012.

The time at AROHO gave me a renewed sense of trust in my vision and direction for my writing. Being amongst so many vibrant women whose imaginations were untamed and whose sense of community was deep was a pure gift.
–Renny Golden