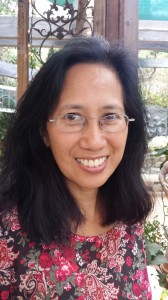 Thelma Virata de Castro is a Filipino American playwright and mom. Her work is included in the Asian American Women Playwrights Archive at the University of Massachusetts at Amherst. She received a residency at Hedgebrook and attended the 25th Anniversary Alumnae Reunion Celebration. Her work was featured in Guerilla Girls on Tour’s WE ARE THEATRE, and she is a proud supporter of the Los Angeles Female Playwrights Initiative. She is former Literary Manager of San Diego Asian American Repertory Theatre, which produced the world premiere of The Goddess of Flowers. Cookies for Prisoners was included in Cygnet Theatre’s Playwrights in Process New Play Festival, in partnership with Playwrights Project. She interviewed community members and developed pieces for Asian Story Theater’s Stories of the Sun Café. She is the founder of San Diego Playwrights, an all-volunteer network working to get local playwrights produced in San Diego.