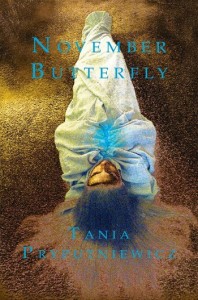 Alternately image rich and direct, the narrative lyric poems in November Butterfly (Saddle Road Press) channel the voices of iconic women, from Nefertiti to Guinevere to Marilyn Monroe and Sylvia Plath. The collection explores women’s choices and their consequences, as well as the violences that are not chosen. It delineates the collective responsibility, male and female alike, for posing challenges to the creative feminine. Section one inhabits familiar iconics such as Joan of Arc, Amelia Earhart, and Lady Diana; section two inhabits Guinevere’s abduction and coming of age at Camelot. The third section breaks from persona poems to revisit the book’s themes through the experience of a childhood rape. The collection as a whole celebrates the hidden strengths, vulnerabilities and choices women face as they pass through the timeless initiations of falling in love, raising children, and staying true to oneself.

My AROHO story begins in a cubicle where I had newly returned to teaching community college English after a decade-long hiatus I took to I raise my family. I walked out of a class rife with students texting one another under the desktops and signing absent classmates “present” on the roll sheet and pulled up my email to see that I’d been accepted to attend, teach and present at AROHO’s summer 2011 retreat. It was the first step towards living my dream of working with motivated women writers in a dynamic environment in which every participant gave and received of her talents.

Friendships forged at AROHO retreats provided me with courage to create curriculum for online classes over the next four years. Risks I saw poets taking at the 2011 and 2013 retreats (by Lauren K. Alleyne, Michelle Wing, Bhanu Kapil, Diane Gilliam, and Evie Shockley) initiated an ongoing transformation in how I perceive my calling and commitment to my poetry. In a desert delight theater workshop with Nicelle Davis and Nicole Galland at the 2013 retreat, I was able to physically imagine into and inhabit the core metaphor for my then unfinished poetry manuscript. Ruth Thompson believed in the poems; under her mentorship and with the daily help of a tight knit group of writers I met through AROHO, I wrote the rest of the manuscript. Thompson’s Saddle Road Press published November Butterfly in 2014.

AROHO’s active female collaborations remain inspirational for me as I move forward. I’m thinking especially of the 2011 retreat, during which Mary Johnson unveiled her book, An Unquenchable Thirst, closing the circle by keeping her promise to Darlene Chandler Bassett to write her story while nurturing the AROHO community we have come to know and love at Ghost Ranch with its pristine privacy bordered by sky, canyon walls, and the luminous hearts of other women realizing their dreams.

“In November Butterfly, the lyrical I looks into the mirror to find a different face with each pass. In this way, Pryputniewicz maintains the intimacy of the poetic I while expanding the personal lyric to a global resonance. As Ophelia, Jeanne d’Arc, Nefertiti, Amelia, Lady Diana, Marilyn and Sylvia come to reflect, we too find ourselves dissolving into the mirror…Pryputniewicz threads the narratives of multitudes into the singular I; with her gift of deep empathy, imagination, and lyricism, she gives readers the chance to live again and again and again.”

–Nicelle Davis, author of Circe, Becoming Judas, and In the Circus of You

“Reading, we enter a world in which Guinevere loves and does not love; we glimpse her as a girl wearing ‘pale slippers like falcon hoods / so lethal, so light.’ Later, she is a woman, shimmering, conflicted, drawn to a great, obliterating love…What does it mean to love, deeply, passionately, and in ways that will make it impossible to return to the life one was living before? Pryputniewicz does not flinch from the challenges of the labyrinth–pathways that might lead equally, or randomly, to betrayal or desire.”

“James Joyce once wrote that lyrical poetry is ‘the form wherein the artist presents his image in immediate relation to himself’ and Pryputniewicz’s persona poems are exemplary of this. She experiments with voice through the motif of the female experience and the effect is a feminist reimagining and projection.”