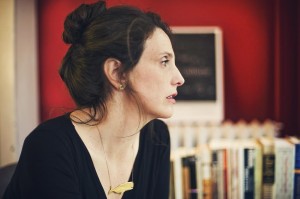 Publication is hope—and humbling. When I write poetry, I’m making something like a song. They were always meant to be sung. Until then, it’s sheet music.—Laura Lauth

Congratulations to Laura Lauth on the selection of her poem, “Mass Grave, Ukraine,” for the Spring 2014 Orlando Poetry Prize!  Her poem is a haunting glimpse at the aftermath of genocide and the way memory and new life somehow coexist, hand-in-hand.

Laura’s winning poem, “Mass Grave, Ukraine,” will be published in Issue No. 16 of the Los Angeles Review.

We asked Laura to tell us about what inspired her winning poem:

Last summer, while researching another poem, I found articles describing two early twentieth-century genocides, both of which took place in the ancient Ukrainian city of Vinnytsia: the first, perpetrated by Stalin’s secret police against mostly ethnic Ukrainians (1937-1938), and the second, committed by Nazi death squads against the town’s entire Jewish population (1941). In a span of four years, over 37,000 people were executed and secretly buried—men, women, children, the elderly. One of the largest mass graves was hidden under an orchard and held the bodies of 5,641 victims. There was a photograph: I couldn’t turn away; we forget so easily, and I wanted to remember.

Laura Lauth teaches creative writing at the University of Maryland’s Jiménez-Porter Writers’ House, which she helped found in 2002.  Her poems are forthcoming or have appeared in the journals 3.7, Redivider, and the Bellevue Literary Review, among others. She lives outside Washington, DC with her husband and two sons.