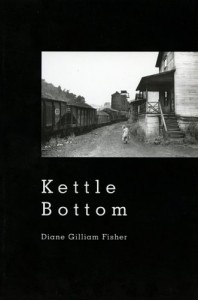 Diane Gilliam, AROHO’s 6th Gift of Freedom Award Winner, has been widely recognized for the voice of honesty, beauty, and resilience  that she has given to Appalachian culture and history–among the many other subjects of her writing. Her second book, Kettle Bottom, is a collection of poems written in the voices of people living in the coal camps at the time of the 1920-21 West Virginia Mine Wars. Kettle Bottom has won several prizes, including a Pushcart Prize and the Ohioana Library Association Book of the Year in Poetry. Gilliam also won the 2008 Chaffin Award for Appalachian Writing. Below is an excerpt from Kettle Bottom.

Explosion at Winco No. 9

Delsey Salyer knowed Tom Junior by his toes,
which his steel-toed boots had kept the fire off of.
Betty Rose seen a piece of Willy’s ear, the little
notched part where a hound had bit him
when he was a young’un, playing at eating its food.
It is true that it is the men that goes in, but it is us
that carries the mine inside. It is us that listens
to what they are scared of and takes
the weight of it from them, like handing off
a sack of meal. Us that learns by heart
birthmarks, scars, bends of fingers,
how the teeth set crooked or straight.
Us that picks up the pieces.
I didn’t have
nothing to patch with but my old blue dress,
and Ted didn’t want floweredy goods
on his shirt. I told him, It’s just under your arm,
Ted, it ain’t going to show.
They brung out bodies,
you couldn’t tell. I seen a piece of my old blue dress
on one of them bodies, blacked with smoke,
but I could tell it was my patch, up under the arm.
When the man writing in the big black book
come around asking about identifying marks,
I said, blue dress. I told him, Maude Stanley, 23.