Cry of the Nightbird, edited by Michelle Wing et al. 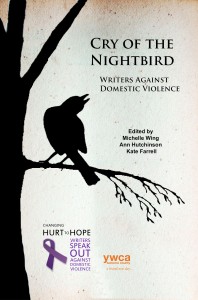 In Cry of the Nightbird: Writers Against Domestic Violence (edited by Michelle Wing, Ann Hutchinson and Kate Farrell), thirty-eight writers speak out in more than fifty prose and poetry pieces of a hidden tragedy: violence in homes, living in fear, and forced silence. Authors from every walk of life and every aspect of this difficult issue raise their voices as one to end this silence, to bring freedom and release for themselves and others. These words will inform and inspire readers: give them eyes to see, a way to express, and motivation to act. Now available for purchase at the YWCA Sonoma County’s online store! (The YWCA receives 60% of sales proceeds.)

At the 2011 Retreat for Women Writers, Michelle Wing read two poems she had originally written for “Changing Hurt to Hope: Writers Speak Out Against Domestic Violence.” She also met Dora McQuaid and watched her film about her own journey with poetry and domestic violence activism, “One Voice.” She bought a copy of the film, and showed it to her co-workers at the domestic violence agency where she volunteers back in Northern California. Returning to AROHO in 2013, Michelle’s sense of herself as a writer and of her mission as an activist were even stronger. She gave a Mind Stretch talk called “Healing with Words,” and was overwhelmed by the outpouring of support she received from everyone present. In that talk, Michelle said she wanted to create a book, a collection of the “Hurt to Hope” writings. When Michelle returned home for the fourth series of “Hurt to Hope” events, two local women stepped forward, and said, “Let’s make it happen.” As they worked on the anthology, AROHO continued to have an impact. Poet Carrie Nassif (AROHO 2013) has a piece in the final book, and her beautiful photographs illustrate each of the four sections. A quote from a poem by Ruth Thompson (AROHO 2011 and 2013) opens the third section. And always, Michelle was bolstered and inspired by the presence of AROHO throughout the project, simply knowing that her sisters were waiting in the wings.

Preliminary Reviews for Cry of the Nightbird:

“By reading and thoughtfully considering the contributions of the writers featured in these pages, you join the ranks of those who recognize the devastating effects of domestic violence. More importantly, you help to begin a much needed healing in our community where one in four families are affected.”

“Cry of the Nightbird: Writers against Domestic Violence raises our understanding to a higher level. The authors connect difficult topics to real life situations through short fiction, personal narrative, poetry, and art. I can’t think of a more fitting platform for an exploration of this important and personal topic that affects our entire community.”

Do you have a passion for social media and its potential for global women’s networking? Work shoulder to shoulder with our Fire Heart Circle to expand AROHO’s global outreach.