Body on the Wall by Michelle Wing

Home » Books » Body on the Wall by Michelle Wing 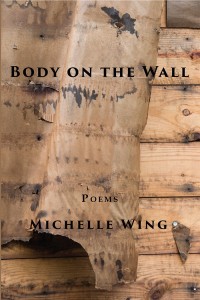 Michelle Wing’s poetry collection, Body on the Wall, is a haunting and deeply personal work, divided into four sections based on the elements: Earth, Wind, Fire and Water. Untangling the many threads that make up a life, Wing writes about being a daughter, violence against women and girls, mental illness, her identity as a lesbian, her love for her wife, and the search for spiritual direction. Beyond this, in each poem, whether it is one of pleasure or pain, there is evident an underlying trust that language and the beauty of words can provide salvation.

The journey to Body on the Wall has been about AROHO from the outset. At the 2011 AROHO Retreat for Women Writers, Michelle Wing read the title poem (under a different name) and a second poem at an AROHO evening reception. Ruth Thompson came forward to compliment her work, and a friendship started. A small group of AROHO friends met for a mini-retreat in May 2013, including Ruth. At that time she said she was interested in publishing Michelle’s collected poems at her independent press, Saddle Road Press. At first, Michelle wasn’t sure Ruth was serious. But at the 2013 AROHO retreat, where Michelle read new poems, Ruth made the offer again, and Michelle said yes. They set a deadline of January 2014. As the book progressed, it became clear that one section of the book was incomplete, and Michelle ended up writing over twelve new poems that fall, in addition to all the revision work. When it came time to secure the ever-important back-cover blurbs, Michelle turned to her AROHO connections. Janet Fitch (AROHO 2013), Barbara Rockman (AROHO 2011 and 2013) and Nicelle Davis (AROHO 2013) all agreed to read the manuscript. The January deadline was met, and the book debuted as an advance review copy at the AWP Conference in Seattle in late February, with its official release date in May 2014. She also received incredible publicity through the new website created by Maura MacNeil (AROHO 2011 and 2013), off the margins. As the first featured woman writer, Michelle had five of her poems published, along with her writer’s statement and answers to several questions. This post went up in late January, along with information about the  new collection, just as Body on the Wall was coming into the world.

“These deeply intense and personal pieces could possibly unhinge a whole web of emotions, except that they’re each so beautifully crafted and considerate in their plea for a collectively healed wisdom. … Like a closely-knit blanket, Wing has expertly covered us with her unabashed intimacy, where we find ourselves looking out through the different colors of yarn, at a world cloaked with heaviness, but flooded with light.”

“Now, how to describe Michelle Wing’s book of poems, Body on the Wall? Lyrical yet fierce? (Yes, I know, I know ‘lyrical’ is an overused book review cliché, but when something actually is lyrical you have to say so, no?) Lovely, wistful and startling? Yep. Honest god’s truth–I loved this book.”

– Dr. Marguerite Maria Rivas, author of Tell No One: Poems of Witness

“These poems are like swallowed charcoal, purifying the toxins they’ve ingested. Brave, bracing, tender and true.”

– Janet Fitch, author of White Oleander and Paint It Black